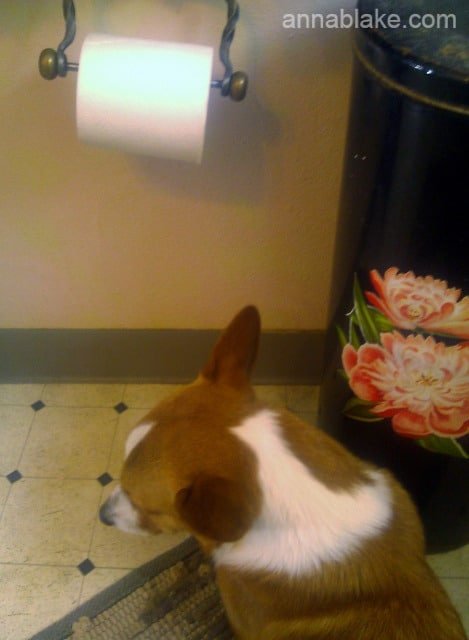 Walter is starting to settle in with us. Now I get to go to the bathroom by myself… about once every three days. It’s the kind of thing you expect from a herding dog, but being a rescue as well, Walter likes to go the extra mile.

I’ve had a couple of requests for an update, and although it’s strange that you would rather hear about Walter than another of my long-winded sermons about the benefits of dressage, here goes. Walter came here from the Wyoming Corgi Rescue one month ago (read here).

I have always had herding dogs, but I’m new to corgis. They need special considerations. For instance, corgis are short enough to fit into an empty feed bag, but too long to turn around to get out. My Dachshund friend welcomed me to the “Long, Low, and Level Club” and this might be what she meant.

Walter is 2 1/2 years old and that makes him a youngster here. During morning chores, he and Tomboy, the Briard, tear around the farm at light speed. Somehow Walter manages to out run Tomboy, covering ground with freakishly long strides for such short legs. What a hand gallop, equine world take note!

His height has some advantages, he can fit into the kitty litter boxes, and when he stands underneath Tomboy, he is totally invisible. On the low (arf!) side, in our group of dogs Walter is just about the right height to get tail whacked in the face all the time. It makes him a little squinty eyed.

Walter isn’t one to complain, but he does not really appreciate the feline sense of humor. He does like Hero, the ancient, blind, and deaf cattle dog. Hero’s a heavy sleeper, smells interesting, and sometimes allows Walter on the couch.

As for me, I love him. Walter and I have so much in common: we both like second breakfast at mid-morning and hate being in the same room as a rug cleaner. We both wake up alarmingly early and cheerful! Given the chance, we are both avid nappers.

I do have one compliant. Initially there was a serious tongue problem. Although his spit was working really well as hair product, I felt there was a legitimate concern about dehydration. The licking had to stop, so I’m teaching him to hug instead. It’s a tradition among Blake dogs.

Last week I went to the Denver Dog Show and saw some of Walter’s relatives. He doesn’t look like them: His back is too long and lean, his legs aren’t straight. I don’t expect that Walter came from a very ethical breeder. It isn’t a surprise. This is where I say rescue dogs are a wonderful choice, but if you do buy from a breeder, be careful. Puppy mills wear excellent disguises these days and it’s easy to be tricked. 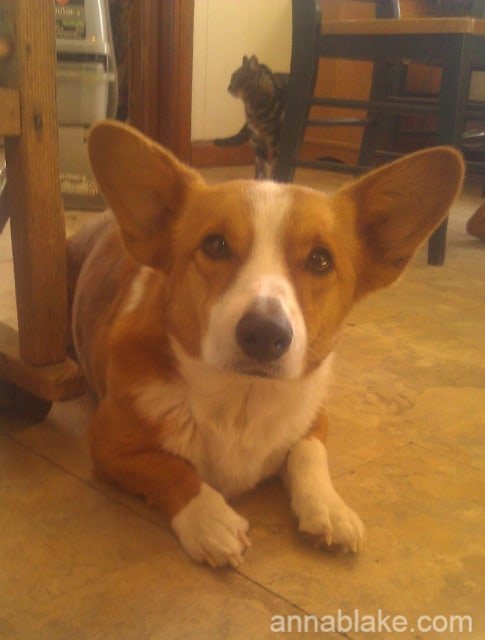 Walter still worries some. Will he be moving again? A few too many times a day, Walter gently puts his feet on my lap, and looks me square in the eye. I close my knees on either side to steady him and he leans his head rakishly to the side and gives me a big smile. Corgi lips curl at the corners and he flashes every tooth in this mouth. Walter’s trying hard to look both adorable and irresistible. But as his nose rises, gravity pulls his ears back, which pulls his the skin on his forehead to reveal the white of his eye. He gets that slightly alarmed and dazed look seen on women have who have had too much plastic surgery.

Relax, Walter. You don’t have to try so hard. You’re home.